Preface: On July 26th, we celebrated the 32nd anniversary of the signing of the Americans with Disability Act. This article is dedicated to everyone battling an injury, illness, or challenge. 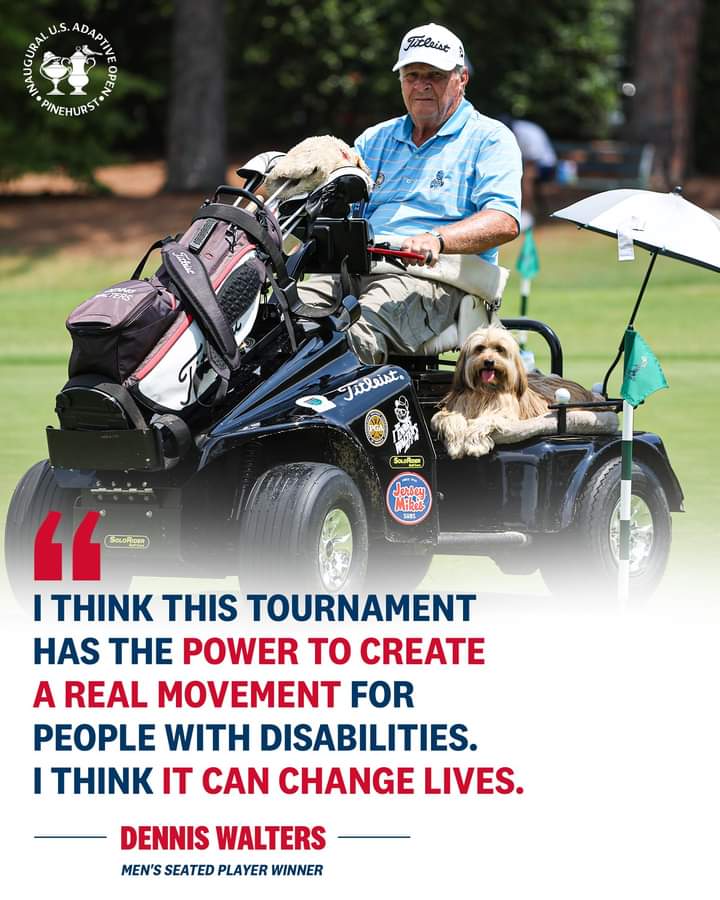 Dennis Walters was a very promising young golfer. In 1967, he won three major New Jersey state junior championships. He earned a golf scholarship at North Texas State University where he was competitive against the likes of Ben Crenshaw, Tom Kite, Lanny Wadkins, Curtis Strange, Bruce Lietzke, Jim McLean and Andy North. He graduated in 1971 with a BA in Business. Later that year, he tied for 11th at the US Amateur.

He started dreaming of playing on the PGA Tour and at the age of 24 he narrowly missed his opportunity to qualify at Q School. Some people would have been heartbroken, but Dennis threw himself completely into preparing for the next Q School.

You could say that golf was his entire life. In early 1974, he started working at Wykagyl Country Club in New Rochelle, NY. His job was to represent the club playing in tournaments, playing with members, giving lessons, and practicing. He lived in the country club’s Crow’s Nest above the locker room and ate ALL his meals at the club. For an aspiring touring professional, he was living the dream.

On July 21, 1974 he struggled in a tournament. The Q School was fast approaching so he arranged to spend a few days with his pro and mentor, Ralph Terry at Roxiticus Golf Club in Mendham, N.J. In addition to being a PGA Professional, his mentor was also a former Major League pitcher who won two World Series titles while pitching for the New York Yankees. In  1962 he was named World Series MVP after pitching a 1-0 shutout in game 7. His mentor’s positive attitude always seemed to help Dennis get his game back on track.

Upon arriving at the course, Dennis jumped in a golf cart and set out to find and join Ralph who was on the back nine. On the way to meet his mentor, the unthinkable happened when the cart's brakes failed and skidded on some rocks while driving down a steep hill resulting in it tipping over and Dennis being thrown from the cart. The accident and the moments that followed are etched in his memory and replay in slow motion: “I tried to get up but couldn’t move. I was lying flat on my back without a single cut or scratch on my body. My pants weren’t even ripped. There wasn’t any blood and I didn’t feel any pain. In fact, everything seemed normal except that I couldn’t move my legs. In an effort to get something going, out of fear probably, I started beating on my leg. But there was no feeling at all.”

He was transported to the hospital in Morristown, NJ where doctors determined that his T-12 Vertebrae had been dislocated, damaging his spinal cord and resulting in paralysis from the waist down. Six months later his doctors told him that he would never walk again but Dennis refused to give up hope of being able to golf again.

When his dream of playing on the PGA Tour was no longer within reach Dennis felt lost for a time but he used his never-say-die-attitude and love of golf to find a new dream. After seeing legendary trick-shot artists Paul Hahn Sr. and Joe Kirkwood, he dreamed about creating his own golf show. It would take a lot of work, but he now had a renewed sense of purpose that motivated him. There is just something very powerful about having a golf dream for an individual that loves the game.

Sometimes for an individual with a disability, accomplishing your dreams also requires being an innovator, and, for Dennis Walters, that involved co-designing with his father a special swivel seat that could be mounted on the passenger side of the golf cart. The swivel seat would allow him to hit from a stable platform without losing his balance or injuring his back. Over the past 45 years, that swivel seat has allowed him to achieve his goal of becoming one of golf's greatest trick-shot artists and being an inspiration to tens of millions of golf fans and individuals with disabilities worldwide. During that time, he has traveled more than 3 million miles around the world performing more than 3,000 shows to benefit organizations such as the First Tee, PGA, and USGA.

During his distinguished career, Dennis has received six major golf awards and honors from various golf organizations recognizing his contributions to the game of golf. These include the Ben Hogan Award (1978) from the Golf Writers Association of America, The Dennis Walters Courage Award (1994) from The International Network of Golf (ING), being named an Honorary Lifetime member of the PGA of America, Distinguished Service Award (2008) from the PGA of America, the Bob Jones Award (2018) from the USGA, and induction into the World Golf Hall of Fame (2019).

His impact on individuals facing disabilities has been profound as they realize that if Dennis can do it, so can they.  His inspiring message during his golf show is about reaching for your dreams and doing whatever it takes to make that dream come true. You’re never too young to have one and there certainly are no expiration dates on dreams. Also, “if you have a dream and it doesn’t work out, never stop dreaming… get a new dream!”

His inspirational message helped me when I faced my own seemingly impossible golf comeback and helped me find my “Golf Therapy” dream.  During my recovery, Dennis and Ben Hogan were my personal inspirations that gave me hope I could come back.

Back in the early 1970s, Dennis dreamed of winning a USGA Amateur Championship and he even was in contention for the 1971 US Amateur.  As an aspiring touring professional, he dreamed of winning a US Open. His injury ended his competitive dreams or so he thought.  That was until December of 2021, when the USGA announced the creation of the US Adaptive Open scheduled for July 18th-20th, 2022 at Pinehurst #6. The creation of this new USGA national championship allowed Dennis and millions of other Americans living with a disability to start dreaming about winning a USGA Championship designed just for them.

So at the age of 72, made a call to the USGA and told them that he was interested in playing in the tournament but had one stipulation, he wanted to have his therapy dog, Gussie, along for the “ride” in the cart while he played. When the USGA agreed, Dennis started preparing for his chance to become a US Open winner in the seated division. It had been nearly 48 years since his last competitive tournament. For many years he had not played for a score. He said, “At first it was ugly, but it got better. I learned new things everyday and the learning process was both exhausting and exhilarating.” In the months leading up to the tournament, he participated in two tournaments, the Texas Adaptive Championship and the US Disabled Golf Association’s Open Championship, to prepare for the US Adaptive Open.

At the US Adaptive Open, Dennis shot a first round 84 to grab the early lead and began distancing himself from the field of six men seated players.  A second round 86 gave him a 10-shot lead over Mariano Tubio of Argentina, his nearest competitor.  Winning a USGA Championship is never easy, even with a 10-shot lead and from the start of the final round, something didn’t feel quite right. It might have been related to the 48th anniversary of his injury being the next day. In the final round, Dennis really struggled with his putting, missing many three foot putts as his lead started to shrink. His nearest competitor, Mariano Tubio, was also playing very well and began surging down the stretch. Heading to the final hole the two were tied for the lead. The tournament was ultimately decided when Dennis made a crucial par saving putt on the final green from four feet to secure a one shot victory to win the US Adaptive Open’s Seated Division.

As part of his inspirational message for the past 45 years he told millions of people that your dreams do not have expiration dates, and with his victory in the US Adaptive Open his dream of becoming a US Open champion had become reality.

Following the tournament, he had this to say, “I think this tournament has the power to create a real movement for people with disabilities. I think it can change lives.” He added, “I think we will see much more growth in adaptive golf as disabled individuals now have a championship of our own. I urge everyone in the golf industry to pay special attention when the second Adaptive Open returns to Pinehurst next summer. If this is promoted properly, we could have thousands of new customers.”

Rich O’Brien is a member of the Board of Directors for the National Alliance for Accessible Golf. Rich is a golf writer who tells the stories of golfers who use golf as therapy to recover from their injuries, illnesses, or challenges. Rich survived a complex polytrauma that included a broken back, a broken neck, four skull fractures, and brain damage in every lobe of his brain. Golf therapy was a big part of his own recovery. Now he is an advocate for individuals with disabilities. 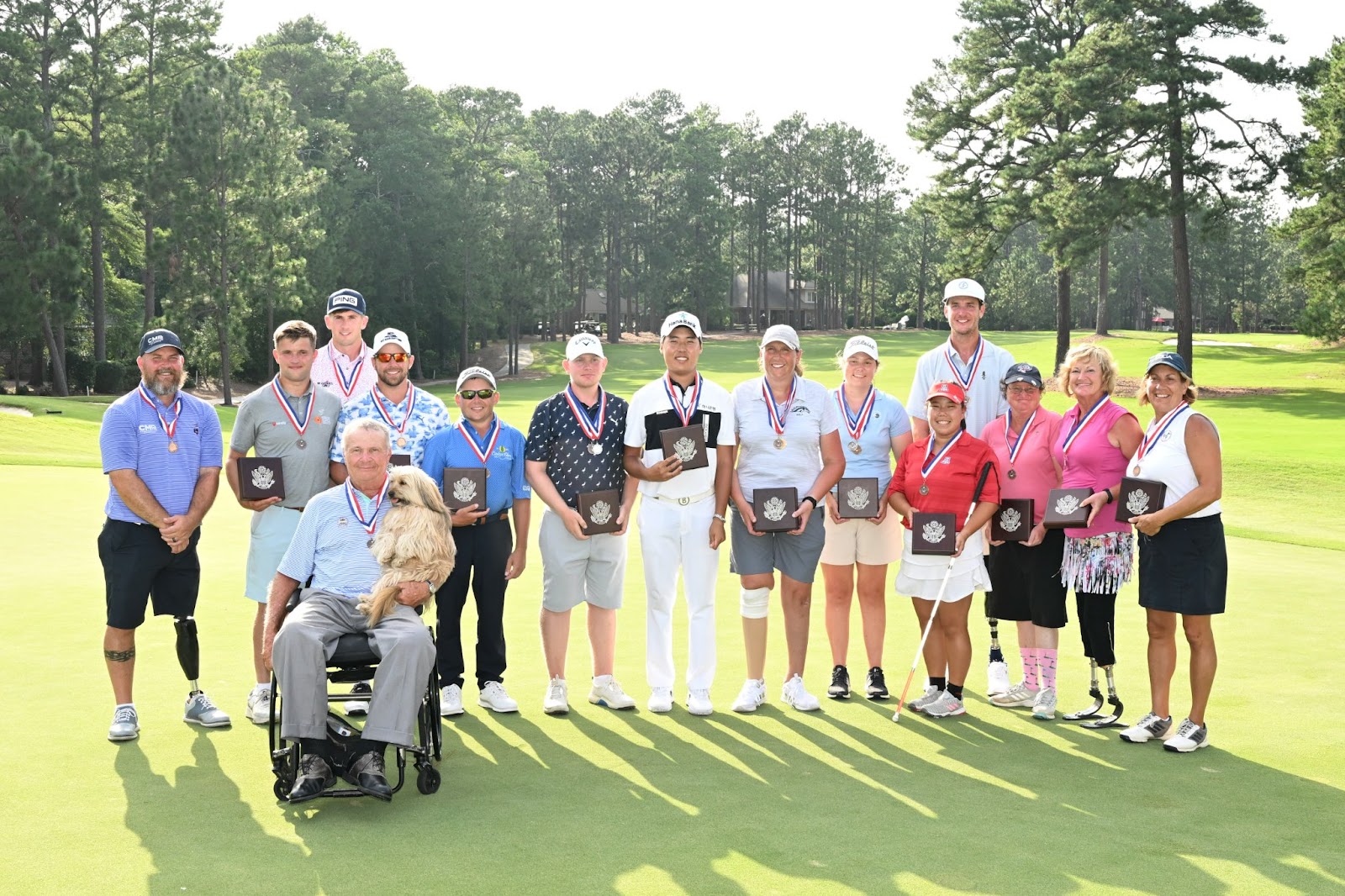 History was made at the inaugural US Adaptive Open held from July 18th-20th at Pinehurst #6 with the birth of the USGA’s 15 National Championship.

The overall winner for the men's division was Simon Lee of South Korea who defeated Felix Norrman of Sweden in a playoff after the two tied with a score of 213 (-3). The two players also tied in the Intellectual Impairment Division.

Meanwhile, Chad Pfeifer of the United States finished three shots back at even par after shooting a final round 68 on his way to winning the Leg Impairment Division. He was followed by Kipp Poppert of England who was 4th with a score of +7 to win the Neurological Division. Jordan Thomas was next at +10 on his way to winning the Multiple Limb Amputee Division. He was followed by five-time PGA Tour winner, Ken Green who finished at +11 for the tournament.  Conor Stone of Ireland finished 7th overall on his way to winning the Arm Impairment Flight with a score of +14.   Other flight winners included Kurtis Barkley of Canada who shot +17 for the three days to win the Short Stature flight and finish T12th overall. Keifer Jones of Canada who won the Vision Impaired flight with a score of +23 to finish T19th, while World Golf Hall of Famer, Dennis Walters, won the Seated Division by one shot with a score of +46 over Mariano Tubio to finish 49th.

Meanwhile, in the women’s division, the overall winner for the men was Kim Moore with a score of 232 (+16) to win by 8 shots over Ryanne Jackson (+24) who won the Neurologic Impairment Flight. Mandi Sedlak was third overall at +41, while Grace Anne Braxton (+45) and Natasha Stasiuk of Canada (+47) rounded out the top five on their way being first and second in the Intellectual Impairment Flight. Rounding out the Top 10 were Amanda Cunha (Visual Impairment champion) in 6th, Jeongwon Han of Korea (leg) in 7th, Cathy Walch (Arm Impairment champion) in 8th, Cindy Lawrence (Multiple Limb Amputee champion) in 9th, and Amy Bockerstette (Intellectual Impairment) rounding out the top 10. Anne Hayes also won the Women’s Seated players flight.